We have a select collection of top quality horses at all ages and levels of training.  We purchase horses with potential for top level competition and for the serious amateur rider.

For information on our sales prospects please contact us at   franklandsfarm@myhighspeed.ca   or call   613-342-3529. We would be happy to show you all the sales horses or help you find the horse of your dreams through our many contacts.

Savvy is by the top Hunter Performance Stallion and 2015 East Coast Champion Hanoverian breeding stallion Sir Wanabi. He is out of our top dressage mare Raffles (Reipo/Dynamo/Marmor) who was on the silver medal winning team at the Pan Am Games in Rio 2007 ridden by Andrea Bresee.

Savvy is backed and started under saddle, he has been very easy and has great rhythm and presence. He stands 16.1 as of Jan. 1, 2017. Savvy will follow into the footsteps of his sire or his dam.

Her dam is owned by Franklands Farm, "Elysee" has the superior lines of Embassy (Escudo) /Sherlock Holmes.

Smuggler was born May 3, 2015. She is Correct and she is Beautiful, and with those fantastic bloodlines she is destined for the hunter or jumper ring! Jan 21/2016 at 8 1/2 months old, she stands 13.2 hands. She is very curious and brave about everything around. Her quality comes through in her excellent gaits showing her balance and agility. She is easy to handle in all situations ie farrier and vet, grooming, leading and her barn manners are curious and polite.

Don't miss out on this future superstar!!

Her dam is owned by Franklands Farm, "Elysee" has the superior lines of Embassy (Escudo) /Sherlock Holmes.

Farouche shows 3 excellent gaits and great balance for her age and stage of training. Her temperament is exceptional, she has been very easy to work around in the stable with grooming, bathing, blacksmith and veterinary work. She enjoys turnout with others and gets along with any horses we have put her with. She hacks by herself or with others around the property. Farouche has the ability to be a top dressage horse with her elegance, super way of going, and lovely expression. 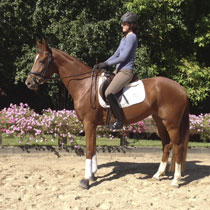 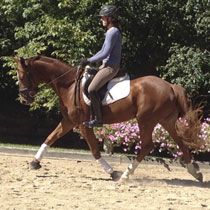 Request is beautifully bred for dressage by the stallion Royal Prince who is by Rohdiamant. The dam side is the ever popular DeNiro who's offspring have been very successful Internationally.

Request is schooling second level and has the scope and quality to go all the way. She is a power house and will need a rider with balance and patience. She has been carefully backed and schooled at Franklands since she was a 3 year old. 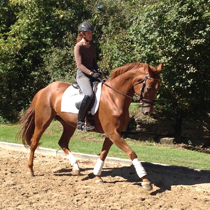 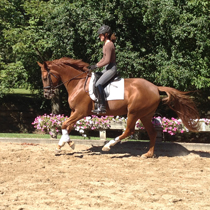 Flynn is by the outstanding stallion, Fidertanz, also sire of the very talented and popular stallion, Foundation, amongst many others. His dam, the Elite Mare Dakota, by the fabulous Diamond Hit, was awarded Best Canadian Mare and Best of Show in her performance year group.

As a foal, Flynn was awarded Champion Foal at his Inspection. The judges, as quoted in the Hannoveraner, October, 2008 issue, considered him ' towering in quality and in a class by himself' above a large group of excellent foals. He has so far lived up to such a glowing evaluation.

Flynn is an elegant, modern type with flawless conformation. He has excellent gaits with sensational rhythm and swing and is equally expressive both in front and behind.

Flynn is a fun horse to work with. Flynn is currently training at the FEI five year old level. He promises to have a serious future as a top FEI competitor.

Watch a video of Flynn by clicking here. 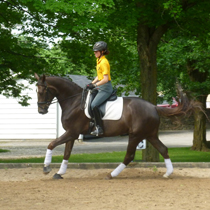 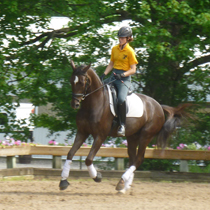 SIMCHA   SOLD!!
2007, black gelding, 17.0 hands, by Sir Donnerhall out of EM Dulcinee. Simcha was Champion Foal at his Hanoverian Inspection in 2007.

Simcha is extremely talented with excellent gaits. He is a calm, good-natured horse that is a pleasure to train. He has good balance and is elastic in his movements.

Watch the latest video of Simcha by clicking here.

Watch the original video of Simcha by clicking here.

Extremely impressive looking animal with striking markings on his face, an outstanding mover.  Although he has a wonderfully easy going and obliging attitude, he has terrific presence, natural impulsion and cadence, and an eye pleasing forward freedom in his movement which would indicate no limits to what he can achieve in dressage alone.  Four years old in July, Cortez is going very well in his basic paces and is ready to compete Training level dressage.  Cortez has also been started over fences and has a powerful jump.  His pedigree includes Freestyle who's sire is Florestan 1 (Furioso) on the top side, and the great jumping lines of Ramiro Z and Lucky Boy on the bottom combining some of the best bloodlines in the modern Dutch, French, and German registries.  Cortez is remarkably easy to handle, clips and ships.  His excellent movement make him a very talented,young prospect for dressage and his scope over fences also make him suitable for a career in jumping.  He has remarkable trainability for an amateur competitive level rider.  His gentle, curious, trusting, and friendly personality make him a pleasure to work with.  He has handled his first season of training with ease and calm rideability.  He has had two owners, his breeder and the current.  Cortez is very ready to go on to greater challenges and will make a wonderful partner for an amateur or young rider, but has plenty of scope for a professional.

Watch a video of Cortez by clicking here.

HARLEY   SOLD!!
2005, bay Hanoverian mare by His Highness out of Walencia (Waterford/Prince Thatch).

Harley has 3 impressive gaits with a lovely sensitive but sensible temperment.  She is very thoughtful with the training and has a naturally forward attitude.  Harley is certain to follow her bloodlines into the dressage ring. 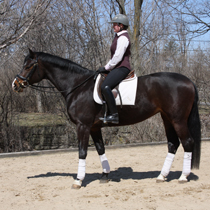 "Flower" is an Oldenburg mare by Flower King out of a Landslide/Bold Music mother. She was born in in Canada in 2004, bay, star, stripe and snip, left hind sock and right hind white pastern. Flower has 3 excellent gaits and has been shown training level dressage as well as FEI 5 yr old classes. She scored 71.4% in the FEI 5 yr old class at CDI Blainville 2009. She is currently in  training and is schooling second level dressage. She shows excellent potential for the advanced levels of dressage.

Born 2004. 17.2hh black Hanoverian gelding by Distelzar out of the Elite Mare Dulcinee (Davignon/Amani). Dolce II is the half brother to Cashmere and also Romanza who was awarded Elite Mare. His half brother, Simcha, was awarded Champion Foal at his 2007 Inspection. Dolce II is doing fabulously in his dressage training. Like all his siblings, he is highly trainable and has incredible suppleness and balance with very expressive gaits.

True to his sire Laptop, who won his testing in Adelheidsdorf 1995 with a score of 138.92 and a 3rd place jumping score of 130.75, Lorenzo is also very talented over fences with tremendous scope and technique.

Ravenna is a lovely, typey, and elegant mare with three very good gaits. She is the full sister to Elite Mare Ryan who was consistently in the ribbons at 2nd level in 2006, including Champion at Blainville CDI and Reserve Champion at the Eastern Canadian Championships. Ravenna is presently doing very well in her dressage training, but would also be a wonderful hunter or broodmare prospect.